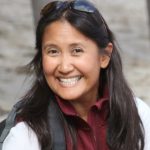 Leilani Ramirez is the manager of dialogue for Sony Interactive Entertainment. An island girl from Hawaii, Leilani moved to Los Angeles (LA) and graduated from Loyola Marymount University with a BA in communications and recording arts. After dabbling in the film and TV post-production world, she fell into the interactive realm and started her game audio career at Electronic Arts — Los Angeles in 2003, working on multiple titles as the dialog lead for the Medal of Honor and Command & Conquer series. From there, Leilani jumped into the freelancing world and was the dialogue supervisor for several titles including Uncharted 3, ADR1FT and Fat Princess Adventures before landing at Sony PlayStation where she completed God of War and Marvel’s Spider-Man PS4. In her free time, she enjoys traveling and photography, and volunteers at the Children’s Hospital of LA, with her dog, Frodo, who is a member of the dog-therapy team.