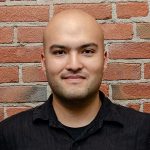 Born in Mexico City and later relocated to Canada, Eric Chan is a program manager with seven years of experience in video game quality assurance (QA). Initially a web developer, he made the jump to video games in 2011 within localization and functionality QA as a tester, test lead and later project manager. Knowledgeable in FQA, LQA, localization and audio, Eric has focused his efforts for the past two years within Keywords’ FQA department. He has since been focusing on project delivery, promoting growth and career paths for staff, and deploying improvements to internal processes.