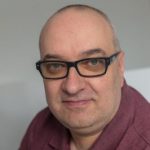 Maciej Miąsik is a veteran game developer, producer, designer, sound designer, programmer and cofounder of several gamedev studios that have been active for the past 25 years. Maciej was head of production and responsible for the first part in 2007 of the Witcher series. Other games he has participated in may be known to adventure game players: Reah: Face the Unknown, Schizm: Mysterious Journey, Mysterious Journey II: Chameleon and Sentinel: Descendants in Time, and recently, Beat Cop. One title codeveloped by him is Electro Body (1992), considered one of the first successful Polish PC games. Maciej is also actively engaged in different educational efforts such as curriculum director at Game Dev School and as a regular lecturer at Warsaw Film School and Polish-Japanese Academy of Information Technology. He is currently working as a member of the board at Movie Games S.A. and on his new game at Pixel Crow.